Sarah Carroll splits her time between a houseboat in Dublin and a cottage in Wexford. Before turning to writing, she lived in Tanzania, where she founded and ran a hostel while working to support local community projects. The Words That Fly Between Us is her second novel. #WORDSTHATFLY @SarahCAuthor

The Art within The Words That Fly Between Us

Okay, if I’m being perfectly honest, the drawings described in the book were added in one of the final drafts. (I think this book went though eight drafts. When placed side by side, I’d say only twenty per cent of the original text remains in the published version.)

I wanted the novel to be a page turner plot-wise. I also needed the various manifestations of the theme of the power of words to be seamlessly interwoven. This took up a lot of the work for the original drafts. It was only in later drafts, when I drilled deeper into Lucy’s character, that it was suggested by my editor that I describe some of the drawings (actually, I’m pretty sure my editor was getting at this for a while, but I ignored her until around draft five…).

I was worried that adding descriptions of the drawings would be boring (like describing a dream) but in the end, the descriptions helped to bring out the theme of the power of words. They gave Lucy a way of expressing all the things she couldn’t articulate, and also a way of analysing what was happening in her life.

We see her draw her dad, trying to capture his mood and, therefore, understand its effect on the house. We follow Lucy’s changing image of Ms Cusack as she sorts the truth from the lies. (In earlier versions of the novel, Lucy actually interacted with Ms Cusack, but later, when these interactions were removed and the drawings were added, it actually brought Lucy closer to Ms Cusack than before). Ultimately, we see how Lucy sees herself, as a prisoner in a sterile house, and we see what she wants to become: an artist with the freedom to express herself.

In a way, as a writer, I am the opposite of Lucy. I work with words. I am a hopeless visual artist. I couldn’t draw a banana if asked. But I can describe it. Lucy’s battle, however, is with words, and so it made sense for her to find expression through drawing until she finally finds the words she needs to become herself. 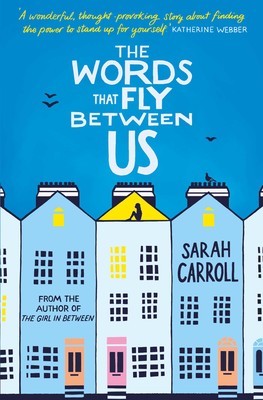 Lucy’s father is a successful lawyer making a killing on the property market. She and her mother want for nothing. Nothing, that is, that can be bought. But money cannot buy Lucy the words she needs. The words to stand up to her bully of a father. The words to inspire her mother to do something about the family life that is suffocating them both. The words to become the person she wants to be.

Then Lucy finds something else: An escape route…

Soon she discovers that every building on her row is connected, through the attic, to the next. As she explores the inner lives of those who live on her street, Lucy realises that she is not the only one to suffer in silence. She also sees ways she can help some, and ways to punish those that deserve it.

But as the mighty fall, Lucy is forced to realise that while she can affect the lives of others from the safety of the attic, she will need to climb down to face her own fears.