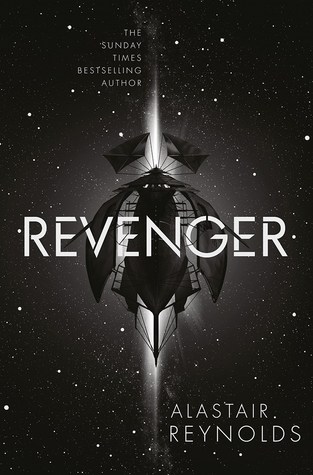 The galaxy has seen great empires rise and fall. Planets have shattered and been remade. Amongst the ruins of alien civilizations, building our own from the rubble, humanity still thrives.

And there are vast fortunes to be made, if you know where to find them.

Captain Rackamore and his crew do. It’s their business to find the tiny, enigmatic worlds which have been hidden away, booby-trapped, surrounded by layers of protection–and to crack them open for the ancient relics and barely-remembered technologies inside. But while they ply their risky trade with integrity, not everyone is so scrupulous.

Adrana and Fura Ness are the newest members of Rackamore’s crew, signed on to save their family from bankruptcy. Only Rackamore has enemies, and there might be more waiting for them in space than adventure and fortune: the fabled and feared Bosa Sennen in particular.

Revenger is a science fiction adventure story set in the rubble of our solar system in the dark, distant future–a tale of space pirates, buried treasure, and phantom weapons, of unspeakable hazards and single-minded heroism and of vengeance…

Review: I’ve got to admit, I had to put this down and then come back and try again as the plot writing did not resonate at first, but when I came back to it, I was drawn into this space opera world of a crew oddly similar to the Serenity, a universe not quite our own with it’s own rules, the start of an overarching plot which has much promise and an awful lot of low-tech speech with reminds me in some ways of a kind of pirate-esque grimdark 40k.

Adrana and Arafura Ness are will-full and stubborn in their own right’s and this tale of treasure hunting, revenge and coming of age is a fun read taken from the PoV of Ara(Fura) as she tries fulfill her quest to save the family fortune and how it goes wildly out of control.

It’s not the tech or physics heavy sci-fi I normally like, but I enjoyed it regardless and recommend.

One thought on “Revenger (Revenger #1) by Alastair Reynolds”