Sean Cummings is a fantasy author with a penchant for writing quirky, humorous and dark novels featuring characters that are larger than life.  His debut was the gritty urban fantasy SHADE FRIGHT published in 2010. He followed up later in the year with the sequel FUNERAL PALLOR. His urban fantasy/superhero thriller UNSEEN WORLD was published in 2011.

2012 saw the publication of Sean’s first urban fantasy for young adults. POLTERGEEKS is a rollicking story about teen witch Julie Richards, her dorky boyfriend and race against time to save her mother’s life. The first sequel, STUDENT BODIES is due for publication in September 2013.

Was writing Student Bodies easier than Poltergeeks?
Actually it was a bit easier as I knew my characters better and after having looked at the feedback via reviews. I had a very good idea as to what I intended to write because the outline was something planned out for quite a while.

Did you base the magical elements of the books on known beliefs or create your own?
Sort of a potpourri of wicca, spirtiualism, spoon bending and a bunch of other stuff thrown into a stock pot to simmer for a few hours. What resulted is some very believable magic that’s fairly unique in UF, I think.

Bullying is central to Student Bodies. Is it a subject you feel strongly about?
It’s top of mind because as my sister who is principal of a high school puts it – “when we were kids the bullying ended when you went home at the end of the day. Now it follows you everywhere because of social networking and kids don’t get a break from it”. Quite frankly, I’m terrified of what bullying is doing to young people now because of the fact they live such public, interconnected lives via smartphones, Twitter, etc. I don’t think our culture knows how to deal with it – we’re gasping for air – the technology changes so fast and young people are at the forefront of new technology. It’s bloody well frightening and I don’t know if there’s any way to solve it. Part of me expects some form of legislated regulation of social networking sites in the next couple of years.

Cont. Marcus makes a very good point when he says adults forget. Do you think people underestimate how much of (and how long-lasting) an impact bullying has?
Every adult alive today can relate to how it feels when you’re singled out but I honestly don’t think they have a freaking clue of how it manifests and what it does to young people in the here and now. Once it’s out on the Internet, it’s there forever. Theoretically a bullied kid today might be able to Google himself/herself 50 years from now and see a living record of what happened to them in the way on web video, Tweets, FB postings … you name it. Absolutely troubling … I aim to tackle the subject more in future works.

Can you tell us something about yourself that not many people know?
I aspired to be an editorial cartoonist. That was my dream, growing up. 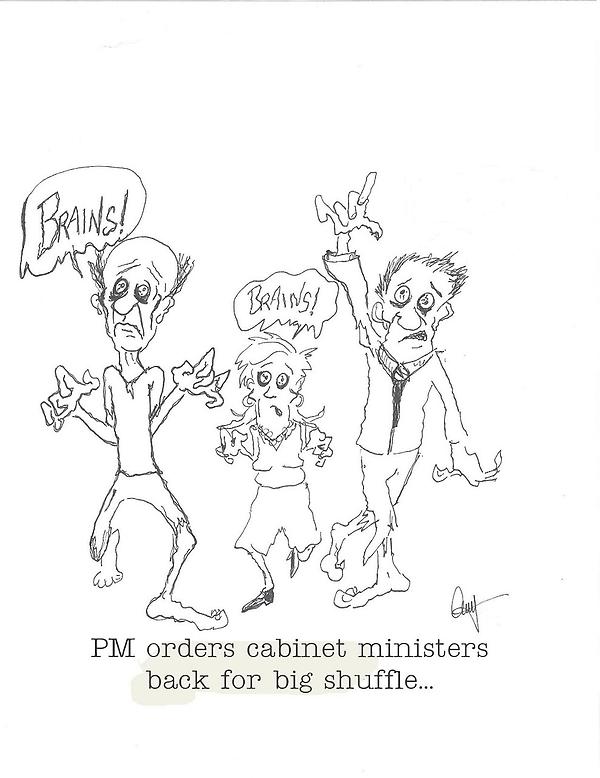 Which character in the Poltergeeks series is closest to you?
Probably Julie’s father. He’s basically me, right down to the Spider-Man t-shirt as well as the white socks and sandals.

What’s the scariest thing about being a writer?
To be honest, nothing really freaks me out when it comes to writing books. I’ve been trying to get published for so long – more than 25 years.

And the best?
The best part is when someone from Israel or Turkey or France sends me an email out of the blue and tells me how much they loved the book. That’s why I write.

For those of us who’ve never been to Canada but really want to visit – are there things that absolutely have to be seen/done?
Calgary Stampede.
The great Canadian prairie
Hockey Night in Canada
Tim Horton’s Coffee
Bay of Fundi
Lawrencetown Beach during hurricane season
I could write volumes … so much to see and do here.

So, what’s next for Julie (Postergeeks)?
There is a third and final book that has been outlined. It’ll be up to Strange Chemistry as to whether it ever sees the light of day as I only have a two book deal. I’d like to wrap it up, though.

Luna: Noooo! We have to know how this ends! Dear Strange Chemistry *makes puppy eyes* please…

What book have you read the most?
The Stand by Stephen King

Favourite place?
My couch with my kids

What magic would you have?
Levitation. You know, mostly to freak out little old ladies at the grocery store.

So have you got your own place to write or can you write anywhere?
Yep – my little office at home. That’s where all the magic happens. 🙂

First time you saw one of your books in a bookshop, what did you do?
I did the happy dance and went SQUEEEE (are dudes allowed to squee??)

Luna: Of course they are 😉

When no one is watching, do you dance?
Nope. I talk to myself a lot, though.

And finally, what is the question you wish people would ask and never do?
How far do you think YA will go?

Student Bodies (Poltergeeks #2) is out today!

One thought on “Interview with Sean Cummings”