New girl, new school, new life on stupid island…. All Jessie Jones wants is to keep her head down, avoid school douchebag Callum Henderson, and coast – middle-of-the-road-like. But when she starts to manifest strange powers during crippling period pains, flying under the radar seems highly unlikely.

Can Jessie embrace her new-found witchiness, control her erratic powers and work out a way to bring down Callum and his cult of toxic masculinity?

This funny, feisty debut deals with serious issues such as toxic masculinity and sexual harassment with humour, a lightness of touch and an accessible first-person narration. Readers will love Jessie’s authentic, witty voice and the everyday school setting – with just a dash of magic!

So there I was, in Maths, minding my own equations business, trying to look just the right amount of confused at the numbers and letters as they were scribbled on the whiteboard, concentrating on Mr Anstead’s monotonous drone, when there was a knock at the door and a girl walked in. She mumbled an apology for being late, blushed furiously and practically ran to her seat, which was somewhere behind me.

It’s never nice walking into a classroom and having thirty pairs of eyes staring at you, so I tried to catch her eye to shoot her a smile of solidarity. She was determinedly focused on the floor. After a confused moment, Mr Anstead launched back into variables and exponents and normality resumed. I was getting back into my faux confusion when I noticed Callum passing a note to Freddie on the desk next to him.

I didn’t mean to look at it, really. I was just drawn to it, my eyes rebelling against my head-down protocol. Callum had drawn a picture of a stick figure with a pepperoni pizza for a face. Underneath was written, ‘Down to a 3? Bet you still would!’. Freddie gave a half-hearted chuckle and passed it back.

It took me a second to get it. It was a drawing of the girl who had just come in. The exaggerated pepperoni pieces represented her fresh bloom of bad acne. I didn’t understand the lowered number exactly, but I could hazard a guess –

some sort of score they were keeping had gone down because she had more spots than usual?

I must have let out a groan, because Callum turned round and caught my eye. Taken by surprise, I gave him an accidental death stare – obviously a not very effective one, as he smirked in response. Ugh, if only he had any idea what it was like – to have bad skin, or a not-perfect face, or any kind of flaw. Idiot.

What happened next happened in a flash, but also, weirdly, felt like a long, protracted, slo-mo section of a movie. I got a sudden wave of really intense, shooting cramps – period pains – that made me double over, clutching my abdomen. Next thing I knew, there was a roar of horror from the table in front of me and Callum was standing up.

The cramps subsided and I looked up. There was commotion all around, a mixture of shrieking and gasping and laughing, chairs scraping back. A wave of excitement. Callum had his hands up to his face but, through his fingers, I could see fear and confusion in his eyes. Muffled moans were coming from behind his hands, which were grabbing at his face – his fingertips running over his cheeks, brow, chin and neck and pulling back in disgust. He whipped his phone out and looked at himself, gave one long scream and then ran out of the classroom.

Him and his bright red, angry, acne-covered face.

So yeah, that was the first time. 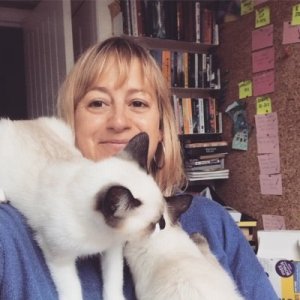 After a brief (but fun) stint working in television and as a primary school teacher, Julia Tuffs decided to take her writing dreams more seriously. She lives in South West London with her family and ragdoll cats (Billy and Nora) and spends her time writing, reading, dreaming of holidays and watching too much reality TV. She aims to write the kinds of books that shaped and inspired her as a teenager. Hexed is her first novel. @JuliaTuffs