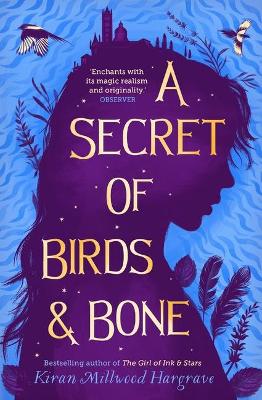 In an Italian city ravaged by plague, Sofia’s mother carves beautiful mementos from the bones of loved ones. But one day, she doesn’t return home. Did her work lead her into danger? Sofia and her little brother Ermin are sent to the convent orphanage but soon escape, led by an enigmatic new friend and their pet crow, Corvith.

Together they cross the city underground, following clues in bones up to the towers of Siena, where – circled by magpies – the children find the terrible truth …

Review: I’ve enjoyed so many of Kiran Millwood Hargrave books and A Secret of Birds & Bone is no exception. One of the things I enjoy so much is how the stories feel so alive as you read them. The worldbuilding and characters are vivid, and I never struggle to feel like I’m walking alongside the characters.

In A Secret of Birds & Bone especially you have so much to appreciate. The bone building ornaments and the house especially. It sounds magical and full of respect when given you have bones as the source it would easily fall under garish.

The story is engaging and it’s easy to read through this book in one sitting without realising the time passed. I was almost at the end before I knew it and never felt like anything was missing from the adventures.

I really enjoyed A Secret of Birds & Bone and would recommend it. It’s not my favourite book by the author, The Deathless Girls and The Island at the End of Everything hold those places but for different reasons. If you’ve not read any of Kiran Millwood Hargrave books before this is a good introduction to her writing but you really won’t be disappointed by any of her books.

Previously reviewed: The Way Past Winter by Kiran Millwood Hargrave

The Island at the End of Everything by Kiran Millwood Hargrave

The Girl of Ink and Stars by Kiran Millwood Hargrave