And Yet, You Are So Sweet, Vol. 1 by Kujira Anan

Maaya Kisaragi, 16 years old, finally confessed to her crush…only to be flatly rejected and ridiculed on social media after. To make matters worse, the most popular guy in her grade, Chigira-kun, overheard her despondent muttering about the whole thing. But instead of making fun of her, he comforts her…and proposes an odd solution to her heartbreak!

Review: And Yet, You Are So Sweet is really “sweet”. From the story, characters to art style everything about this manga has *cute* written all over it. Admittedly Maaya is a familiar protagonist for this genre, she is kind, shy and doesn’t value herself highly. After a failed confession she ends up muttering to herself in the school library in front of the very popular Chigira-kun. The first book doesn’t provide too much on his character, but his cool but distant demeanour fits a familiar patten.

Chigira-kun becomes Maaya new unrequited feelings obsession (by his invitation) and the first book follows the two of them as Maaya works through her challenge list while pretending not to fall for him, all-the-while completely oblivious to the fact that he obviously likes her.

While And Yet, You Are So Sweet might be familiar it is sweet and the art work is cute. It’s the kind of story that it just nice to read and the characters are likeable, so you want to know how this story develops. 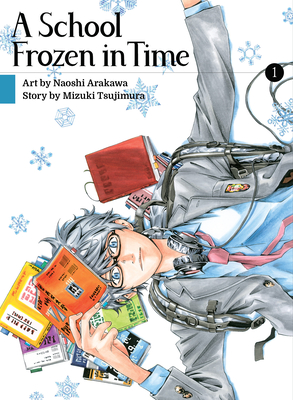 On a snowy school day like any other, classmates and childhood friends Hiroshi and Mizuki arrive at school to find the campus eerily empty. Before long, they find themselves trapped inside with six other friends, and even stranger, all the clocks have stopped at a very specific moment–the exact time when a former classmate jumped off the school roof to their death three months earlier. It turns out that this departed friend is their way out of their current predicament and may even be among their group…but no one can remember who it was that took their life on that sad day. The students must face themselves and their past memories to piece together the identity of this suicide victim or risk a similar fate–with their lives lost and forgotten inside these frigid school walls.

Review:  As the school festival a couple of months ago someone jumped. As the story begins, we have a group of classmates who fiend themselves trapped inside the deserted school. The corridors are empty, phones don’t work, doors and windows don’t open, and the clocks are stopped at the time when this person jumped. BUT no one can remember who it was.

The premise and slow building tension work well, depending on how the story is continued over the next few books I think A School Frozen in Time could really ramp up on the horror. As a beginning I think this first book is a good enough hook to want people to come back and read more.

A smoldering tale of romance and revenge set in the world of the New York Times best seller Dawn of the Arcana!

Ajin are people who bear the attributes of beasts, and in this kingdom Ajin men are forced to serve in the military and Ajin women in the brothels. The Ajin boys who show signs of special abilities are conscripted to serve in the imperial palace as beast servants—status symbols and shields for their royal masters, to be kept or discarded on a whim. When Rangetsu’s twin brother Sogetsu showed signs of such abilities, he was ripped from her arms and given to Prince Tenyou as a beast servant, where he quickly fell victim to bloody royal intrigues. Now in a world that promises only bitterness, Rangetsu’s one hope is to disguise herself as a man and find a way into the palace to avenge her brother!

Rangetsu knows she must keep a low profile in the palace if she’s to have any hope of tracking down her brother’s killer. But when an Ajin is wrongly accused of murder, can Rangetsu stand idly by when she knows that Prince Tenyou has the power to prevent another horrible injustice?

Review: The art is seriously swoony and I think one of the big reasons why I am enjoying this series. In the second book Rangetsu slowly begins to trust the prince, they also begin to investigate. As the story continues you get to know more of the characters and politics. I am a little worried that with so many princes and best masters I will lose track but so far it’s well paced so I think, provided this continues, it should be ok.

The final chapter is my favourite as I think it sets up a lot about Rangetsu character arc.

Nina had a rough start to life, stealing to survive—and eventually being sold into slavery by her own brother. But to her surprise, her captor, Prince Azure, ordained that she would live the life of a princess…specifically, that of the recently deceased princess-priestess, Alisha. But despite her changing fortune, Nina won’t give up her old life without a fight…and Azure might just be the one to finally match her wits. But how much can she trust Azure? And can she stop the feelings budding in her heart, knowing she must eventually marry another…?

Review: I feel like maybe the second book will give me more of an idea how the story and characters. As a first book this isn’t to most engaging introduction to a series. I’m not sure at this point. Nina the Starry Bride has a lot of potential for fantasy story building with palace politics and intrigue, but the first book doesn’t really lay that many foundations. I think this is a wait and see.

Sahoko had lots of friends in high school, so there’s no shortage of people to catch up with at her reunion. But the one face she wants to see is missing: that of Aoi Koshiba, her classmate and first love. A star of the basketball team, Aoi caught Sahoko’s eye as an easy way to score social points. But when Aoi quits the team, an unexpected kiss pulls Sahoko closer to her than she intended to be. With a difficult home situation, Aoi is in need of more than just a cynical social climber. She needs a true friend, and something more…

Review: I read this and then decided to write the review later and when I came back to it, I couldn’t remember most of the story. That’s probably not the best-selling point but I did remember after I re-read the first couple of pages.

Overall Chasing After Aoi Koshiba is nice but not outstanding. I liked that the story begins after everyone is grown up and flashes back to their time in school. Sahoko created what she viewed as a popular version of herself and this is how she behaved at school, the crack to that is Aoi Koshiba, who makes her behave “embarrassingly”.

From the introduction you know that is a love story and the first volume sets up some foundations for that. Sahoko comes across as a caricature ditz which put me off, I’m not sure I like the characters enough to be invested to continue. That said I do like the idea of flashbacks to tell this story so I want to see how this continues in the next volume before I make up my mind.