The Stormlight Archive saga continues in Rhythm of War, the eagerly awaited sequel to Brandon Sanderson’s #1 New York Times bestselling Oathbringer, from an epic fantasy writer at the top of his game. 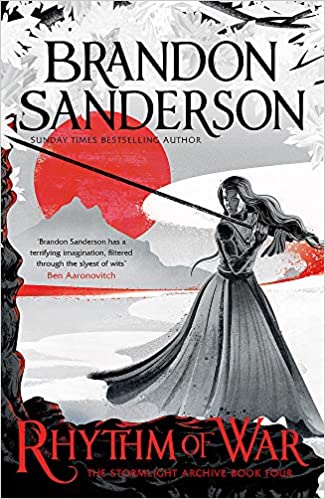 Dalinar Kholin and his Knights Radiant have spent a year fighting a protracted, brutal war after forming a coalition of human resistance against the enemy invasion. Neither side has gained an advantage, and the threat of a betrayal by Dalinar’s crafty ally Taravangian looms over every strategic move.

Now, as new technological discoveries by Navani Kholin’s scholars begin to change the face of the war, the enemy prepares a bold and dangerous operation. The arms race that follows will challenge the very core of the Radiant ideals, and potentially reveal the secrets of the ancient tower that was once the heart of their strength.

At the same time that Kaladin Stormblessed must come to grips with his changing role within the Knights Radiant, his Windrunners face their own problem: As more and more deadly enemy Fused awaken to wage war, no more honorspren are willing to bond with humans to increase the number of Radiants.

Adolin and Shallan must lead the coalition’s envoy to the honorspren stronghold of Lasting Integrity and either convince the spren to join the cause against the evil god Odium, or personally face the storm of failure.

First Impressions of Rhythm of War by @Angelhearte

Imagine my surprise when my coblogger: Luna presented me an opportunity to read, digest and give my first impressions on Brandon Sanderson’s Rhythm of War.

I’m a sucker for fantasy tapestries – those tome-like behemoths, which bring yet another part of an already epic tale and let’s face it; Brandon brings the big guns.

Rhythm of war starts with a ten year ago scene, setting up interesting dialogue between Navani and Gavilar, showing a different side of their relationship and hinting at a dangerous earlier knowledge of a current threat, I won’t say more for fear of spoilers!

Then we jump back to a menagerie of full blown action from Kaladin and Subterfuge by Shallan – Kaladin and his Windrunners in combat with the fused whilst Shallan is trying to infiltrate Ialai’s court – under yet another assumed identity.

I’m left white-knuckled and ready for more – 7 chapters and 98 pages were in this first impressions read and my word – they impressed.

Sanderson brings yet more creativity, plot depth and action to a world already brimming with it. Those of you that have enjoyed his work so far – you need this in your life, those that have not – Buy the Way of Kings and enjoy a fantastic new world of politics, heroism and great characters!

Brandon Sanderson was born in Nebraska in 1975. Since his first publication in 2005 he has written over 25 novels, a graphic novel, and various novellas and short stories. He was also chosen by Robert Jordan’s family to complete Jordan’s WHEEL OF TIME Sequence. His global book sales now top 10 million copies and his COSMERE universe has been optioned for screen by DMG. He lives in Utah with his wife and three
children.

One thought on “First Impressions #RhythmofWar”