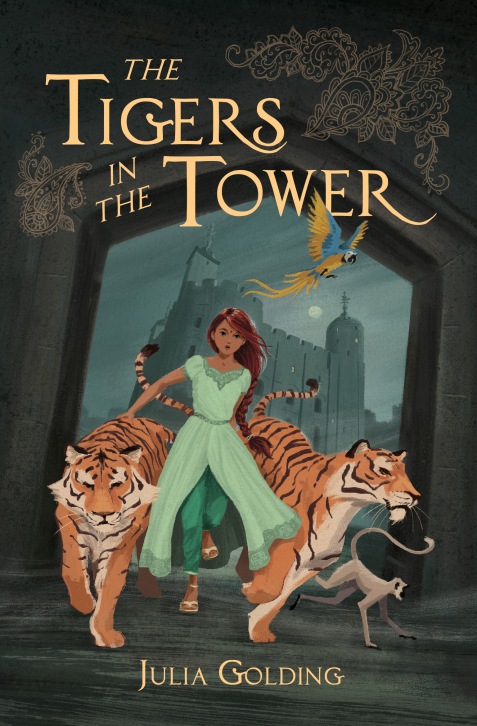 Sahira’s family are travelling to England to deliver two majestic Indian tigers to the menagerie in the tower of London when tragedy strikes and sickness steals Sahira’s parents from her on the journey. Heartbroken and alone in a miserable and dangerous orphanage in London, Sahira is determined to protect her tigers, but to do so Sahira must set out on an adventure and use all her powers of persuasion to engage the help of some new friends along the way.

Can the quest to find her tigers a safe home lead Sahira to find her own place of hope and belonging
in this strange and foreign land?

The Tigers in the Tower – This is a story about a girl, two tigers, and the greatest menagerie in Britain, and possibly the world.

Did you know that from medieval times, the Tower of London was home to the royal animals given to the kings and queens of England? These ranged from small creatures, such as birds and monkeys, to big animals like lions, elephants, wolves and tigers. These troublesome but prestigious gifts all had to be kept somewhere so where better than a fortress where they could be held safely? To pay for the expense of keeping the animals, the menagerie opened to the public. You could either pay the entrance fee in coin or bring a dead cat or dog with you (lions can get through a lot of meat).

When I read about the menagerie in history books, I couldn’t resist the idea of this iconic London building throughout the centuries being home to the exotic – the roars of lions being heard by Shakespeare as he rowed across to the Globe, or the trumpet of elephants coming to the prisoners in the Tower on their last night before execution. As ever, when I get fixed on a place, I have to move in. The best way for an author to do this is to take it over in a story.

History provides wonderful places for this occupation to occur. My first book, The Diamond of Drury Lane, was the result of another takeover by me, on this occasion the Theatre Royal, Drury Lane. I’ve roamed backstage, exploring everything from the costumes in the attic to the cellars underneath. I’ve sprung trapdoors and dropped stage scenery onto my villains. It is the very best playground. Technically, the Theatre Royal Drury Lane is owned by Andrew Lloyd Webber, the composer of many musicals, but imaginatively I own the theatre in 1790. (Andrew, if you wish to contest this, I’ll see you in court!).

Joking aside, if you are thinking of creating your own story landscape, have a rummage around in the past to see if there are any locations that call to you – the pyramids, Ancient Rome, a medieval castle, Tudor palace, Victorian factory, pirate ship… The great thing about choosing real places is that you might be able to visit them, or at least find some good books about them. Very often I find ideas suggested for my plot by historians who come up with facts I couldn’t have imagined (it is true that real life is often stranger than fiction). One of those facts in the case of the Tower of London menagerie was that from time to time the animals would escape, leading to exciting chases through the city. There was also the Tower polar bear who fed himself by fishing for salmon in the Thames. See? You didn’t expect that, did you?

Fantasy offers even greater scope – the sky is not the limit. I fell deeply in love with two fantasy worlds growing up. First was Narnia, the land of talking animals, mythical creatures and children becoming kings and queens – and it was just the other side of a wardrobe door. I graduated on to Middle-earth in The Hobbit and The Lord of the Rings and have stayed there ever since. Part of me is always wandering the Shire or thinking that a wood looks like Lorien. The Peter Jackson films came after I was already a fan so I had a version of the world that wasn’t reliant on New Zealand – gorgeous though that country is. If you strip that filmic version away and go back to the text, you’ll see that Tolkien describes a world that you can find in Europe, just minus the last few millennia of human civilization. Apart that is from the Shire – human culture in very familiar there. In fact, it is suspiciously like the village where my husband came from… I always suspected he had hobbit roots.

A halfway house in fantasy is to create a world where fantastical elements sit on top of what is familiar to our present day, like tinted lens to a pair of spectacles. You can find this approach in Harry Potter where the wizards wonder at the human world of ticket barriers and toasters. Normality becomes strange seeing it that way round. It is also in Rick Riordan’s Percy Jackson series, where the gorgon might turn up at a garden centre or the gods on top of the Empire State Building. It is a fun thing to do creatively as you find yourself going around and thinking of what you could do with places you know and love if you let your imagination loose on them. I took this approach in The Companions Quartet, that begins with Secret of the Sirens. The children in the tale, Connie and Col, belong to the secret Society for the Protection of Mythical Creatures, so these super-natural magical creatures live in our world and have to be hidden and protected. That means ordinary school might be disrupted by an extraordinary beast and you get to fly a Pegasus as an extra-curricular activity!

But do we need these book worlds anymore now we have such amazing graphics on our screens? Can we beat that? In one very important way, we can. Books offer something different. Putting aside the fact that there is a writer behind every computer game or film, you might enjoy a particular computer game because it allows you to build a landscape, such as Minecraft. Or maybe you love a fantasy film series because the CGI presents you with jaw-dropping worlds. I’d argue, though, that writers have been doing this world-creation for centuries through the building blocks of words – these make up the underlying programme. The really fun thing is that every reader, when they run the programme/read the book, will have a different version in their own imaginations. They/you become part of the creative process. We all get to see the same film, but none of us ever read the same book.

Julia Golding is a multi-award winning writer for adults and young adults, including the Cat Royal series. Former British diplomat and Oxfam policy adviser, she has now published over fifty books in genres ranging from historical adventure to fantasy. She has a doctorate in English literature from Oxford. Lion Children’s is thrilled to publish The Curious Science Quest series and The Curious Crime.