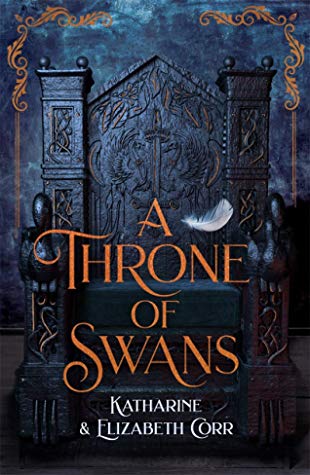 When her father dies just before her birthday, seventeen-year-old Aderyn inherits the role of Protector of Atratys, a dominion in a kingdom where nobles are able to transform at will into the bird that represents their family bloodline. Aderyn’s ancestral bird is a swan. But she has not transformed for years, not since witnessing the death of her mother – ripped apart by hawks that have supposedly been extinct since the long-ago War of the Raptors.

With the benevolent shelter of her mother and her father now lost, Aderyn is at the mercy of her brutal uncle, the King, and his royal court. Driven by revenge and love, she must venture into the malevolent heart of the Citadel in order to seek the truth about the attack that so nearly destroyed her, to fight for the only home she has ever known and for the land she has vowed to protect.

Written in rich detail and evocative language, this is the start of an irresistible, soaring duology about courage, broken loyalties and fighting for your place in the world.

Review: Truthfully, I’ve sat on this review for a while. I wanted time to think about A Throne of Swans and how I felt about the world, story and characters.

I adore retellings, and I love Swan Lake, so this was right in my “wing”-house (I had to), and I really like the world building that is being laid out in A Throne of Swans. There is so far to go from here, especially with the flightless. Katharine and Elizabeth Corr have started some solid foundations for a fantasy world with magic and an oppressive system that the reader knows is already crumbling in its foundations.

Apart from the world I also liked the potential in the story. Admittedly some of it had predictable elements but the take on the source material was compelling. A lot of the highlights are in the system Aderyn is trapped in, the rules and political games that she must abide by.

Where I struggle with A Throne of Swans is the characters. Their behaviours are irritating and predictable. The moments of me (as reader) thinking “why are you doing this, this is stupid” became eclipsed by reluctant acceptance.

A Throne of Swans makes it very clear that there is much more to come. With so much promise for the world and story Katharine and Elizabeth Corr have built I am interested to see where this can go.