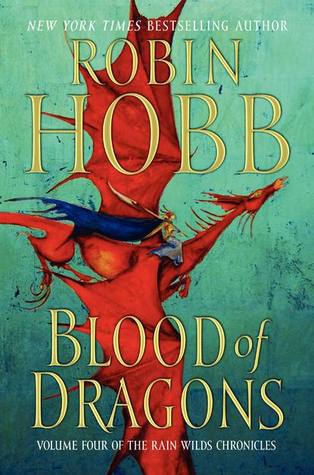 The dragons and their dedicated band of keepers have at last found the lost city of Kelsingra. The magical creatures have learned to use their wings and are growing into their regal inheritance. Their humans, too, are changing. As the mystical bonds with their dragons deepen, Thymara, Tats, Rapskal, and even Sedric, the unlikeliest of keepers, have begun transforming into beautiful Elderlings raked with exquisite features that complement and reflect the dragons they serve.

But while the humans have scoured the empty streets and enormous buildings of Kelsingra, they cannot find the mythical silver wells the dragons need to stay health and survive. With enemies encroaching, the keepers must risk “memory walking”- immersing themselves in the dangerously addictive memories of long-deceased Elderlings – to uncover clues necessary to their survival.

And time is of the essence, for the legendary Tintaglia, long feared dead, has returned, wounded in a battle with humans hunting dragon blood and scales. She is weakening and only the hidden silver can revive her. If Tintaglia dies, so, too, will the ancient memories she carries – a devastating loss that will ensure the dragons’ extinction.

How did I get the book? Bought it.

I have yet to review a Robin Hobb book – this being partly because I’m fairly new to this, but most of it being to a 3 year hiatus from buying books due to limited love and largely falling out of love with the The rain wild chronicles because, as many other reviewers have focused on, – no Fitz or the Fool.

But I came back to this finalé with a more open mind and set on the positives. The Dragons – thinking back to girl-on-a-dragon whilst seeing the new breed start to fly, become majestic and finally put down a thorn in the known world’s side was a delight. The characters could be a little one-dimensional occasionally, but can we not rationalise with some of this? Are we not all guilty of being utterly focussed on one thought process when we really want something! I liked the interactions, the growth and more importantly – The lore.

THE LORE. The world is enormous, Over several series we have learned more about the events before the cataclysm that wiped out dragons little by little, we learn mysteries of ancient magic and how they work. We see characters fight against their fate, some succeeding, some not. But it works.
My only real criticism is that sometimes it can be a little too neat.

This is not my favourite book from the standpoint of the characters, but my word – I love lore and this series delves further than the others. It was a one-sit read for me and I am still bathed in the warmth of remembering how Robin’s books helped my view of fantasy when younger.

It’s a different series from the usual heavy character growth arcs, but it’s powerful in it’s own right and I very much recommend.

Thank you Robin for your hard work!

The next installment in the thrilling #Revenger - #BONESILENCE by #alastairreynolds Thank you @gollancz • Out Now!!! 🌌 "Two sisters ran away from home to join the crew of a spaceship. They took on pirates, faced down monsters and survived massacres . . . and now they're in charge. Captaining a fearsome ship of their own, adventures are theirs for the taking. But Captain Bosa's fearsome reputation still dogs their heels, and they're about to discover that, out in space, no one forgives, and no one forgets..." #ShadowCaptain #scifi #sciencefiction #bookpost #bookblogger #freebie #trilogy #spaceship #booksofinstagram #gollancz #author #ukauthor
Thank you @simonkidsuk @simonkids_UK for #loveboattaipei by Abigail Hing Wen So excited 🤩 “Our cousins have done this program,” Sophie whispers. “Best kept secret. Zero supervision. ” And just like that, Ever Wong’s summer takes an unexpected turn . Gone is  Chien Tan, the strict educational program in Taiwan that Ever was expecting. In its place, she finds Loveboat: a summer-long free-for-all where hookups abound, adults turn a blind eye, and the nightlife runs nonstop." #bookpost #bookblogger #book #bookstagramtour #freebie #yafiction #yafictionlover #books📚
Out this February! 50 LISTS FOR FEMINISTS - JOURNALING FOR EMPOWERMENT by Aura Lewis Thank you @abramschronicle "An inspiring guided journal packed with list-making prompts, feminist history, and dazzling artwork Listers and sisters unite! Get in touch with your feminist side with 50 Lists for #Feminists, a guided journal for cataloging everything that empowers you. Each entry prompts you with a question to respond to in list-making style, and is paired with insight into an important achievement, pioneering figure, or groundbreaking event in women’s history over the past century. Use these pages to list the people who inspire you, your not-so-hidden talents, your moments of bravery, and the issues you care about. Written and charmingly #illustrated by #AuraLewis, this journal offers the space for you to connect to the past, present, and future of the female experience." #feminist #feminism #journel #todolist #books #bookpost #bookblogger #freebie #bookpresents
I adore #bookpost surprises, thank you @orchardbooks @hachettekids for; The Winterborne Home for Vengeance and Valour by @theallycarter "When 11-year-old April joins a group of kids living at Winterborne Home she doesn't expect to be there for very long. But she soon learns that this home isn't like any of the others - especially when she unearths the secret of the missing-and-presumed-dead billionaire, Gabriel Winterborne, who is neither missing nor dead but is actually living in a basement lair, sharpening his swords and looking for vengeance. Now that April knows Gabriel Winterborne is alive, she must turn to the other orphans to keep him that way. As a looming new danger threatens to take Gabriel down once and for all, they must use their individual talents to find a way to make sure this home for misfits isn't lost to them for ever. Because at the Winterborne Home, nothing is what it seems, no one is who they say they are and nowhere is safe. And now a ragtag group of orphans must unravel the riddle of a missing heir, a supposed phantom and a secret key, all without alerting the adults of Winterborne House that trouble is afoot." #mgfiction #mystery #childrensfiction #bookpost #bookblogger #books #freebie #booksofinstagram #bibliophile
Today I'm #reading The Way Past Winter by @kiran_mh ❄️ It's our #bookclub this month and I'm enjoying it, it's very appropriate right now. @chickenhousebooks "Mila and her sisters live with their brother Oskar in a small forest cabin in the snow. One night, a fur-clad stranger arrives seeking shelter for himself and his men. But by the next morning, they've gone - taking Oskar with them. Fearful for his safety, Mila and her sisters set out to bring Oskar back - even it means going north, crossing frozen wild-lands to find a way past an eternal winter." #amreading #bookblogger #mgfiction #fantasyfiction #fantasybooks #winterreads #ukauthor #booksofinstagram
Today is for #reading At least for me. How do you spend the day after #Christmas? My day is a joyful day of being curled up under a blanket with an endless supply of #books📚 I was so fortunate to receive many yesterday and I'm beginning with #SHELFRESPECT by Anne Austen. A #book designed for a #bibliophile 😅 Do you alphabetise your books or organise by genre... or colour? Do you keep all the books you've read, or only the most cherished? Is there such a thing as too many books? (No!) "Bound to provoke (good-natured) debate between #Bibliophiles, SHELF RESPECT is a charmingly illustrated book in defence of towering #TBRpiles and overflowing shelves... no matter how you choose to organise them." @littlebrownbookgroup_uk #boxingday #shelfie #bookstagram #booklover #shelfrespect #amreading