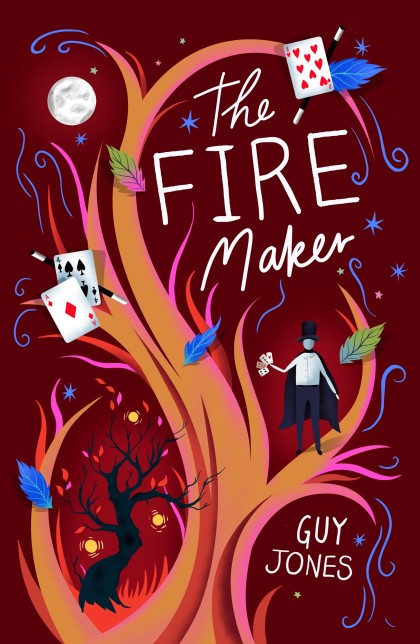 He’s good at it, too: he’s reached the semi-finals of a prestigious competition for young magicians. But when he stumbles into eccentric Mr Olmos’s back garden while running from his former best friend, Alex sees something he can’t explain: three tiny flames floating in the air. Fire magic. Real magic. Soon, Alex and Mr Olmos are swept up in a great adventure of secrets, genies and an ancient, bitter rivalry…

What can readers expect from your second novel for children, THE FIRE MAKER?
The Fire Maker is the story of Alex, a twelve-year-old budding stage magician who discovers three fire spirits living in his neighbour’s garden shed. Things aren’t always easy for Alex; he’s picked on at school, his mum has left, and his dad spends most of the time at work. On the back cover my publisher, Chicken House, have summarised the story as Friendship – Magic – Adventure, and I think those three words capture perfectly what comes Alex’s way over the course of the book. It’s got everything from tender moments between friends all the way to climactic battles with fireballs. It’s also the story of Mr Olmos, who was a small character in my first book, The Ice Garden. We learn a lot more about him here…

Were there any challenges writing the second novel?
I think I made fewer obvious mistakes the second time around, whilst discovering a whole raft of new and exciting things to trip me up. The greatest challenge was the speed with which I had to pick an idea in the first place. The Ice Garden had been kicking around my brain for years before I put pen to paper. I started The Fire Maker about three hours after the idea first came to me.

Where/how do you write?
I’ve set up a lovely writing room in my house that is almost never used for actual writing. Instead I find I’m most productive on trains, in coffee shops and perched at the kitchen counter. I’m writing this answer on the Thameslink between St Albans and London St Pancras. The woman next to me is listening to music too loudly.

How I write has evolved over time. When I worked in theatre I used to try and plan everything out because that seemed to be the sensible thing to do. Now however I just write and see where the stories and characters take me. My first draft almost takes the place of a plan, and I have to be ruthless in cutting it to pieces later. My only hard and fast rule is that I never read back over what I’ve done the previous day. I just pick up from wherever I left off and get going. Otherwise I’d never get past chapter one.

What inspires your writing? What inspired you to write about magic?
I love magical realism. I love the imaginative leap. I love stories about normal people doing normal things who then find that something creepy or strange or uncanny has started to bleed in around the edges. I read all sorts of books, but those are the ones that give me the most pleasure and so those are the ones I tend to write. I’m also interested in how I can use unreal situations to explore real-world themes.

What would be your top tip be for aspiring authors?
There is nothing original in this advice but, firstly, read. Read in order to learn what you like and don’t like in other people’s writing. Read to ingest good writing through osmosis. And read because you love books, (otherwise why would you want to be an author?) And secondly write. No one ever became a writer by sitting around thinking about it.

And finally…. what is your favourite snack/drink to fuel your writing?!
Neat tequila.
Not really.
Tea.

THE FIRE MAKER by Guy Jones is out now in paperback
(£6.99, Chicken House)

Guy was born in Botswana, grew up in Bedfordshire and now lives in St Albans with his wife and step-daughter. He spent a decade writing for the theatre, including the West End musical Never Forget, before finally knuckling down to write a book.

One thought on “The Fire Maker Blog Tour: Q&A with Guy Jones”

Fergus the Furball by #EmilySnape • Published by @ransompublishing "When Daniel's parents scoot off to Scotland instead of celebrating his tenth birthday, leave his dipsy aunt in charge and give him a plant as his present (not the PET he'd pleaded for), can you really blame him for wishing he had a guinea pig instead of a brother? Now Daniel must somehow undo the magic before his parents find out, whilst also managing to defeat bullies, escape nutty chefs, make new friends and ultimately learn how much he truly does love his younger brother (even if he now eats his own poo)." #bookpost #bookblogger #childrensbooks #childrensfiction #freebie #booksofinstagram
The Bigwoof Conspiracy by Dashe Roberts #StickyPines • Published by @nosycrow @nosycrowbooks "When twelve-year-old, UFO-obsessed, Lucy Sladan sneaks out in the middle of a thunderstorm to investigate the unexplained disappearances in her hometown of Sticky Pines, she finds more than she bargained for: a huge hairy creature, a thirteen-year-old stranger named Milo Fisher and a deep-rooted secret. Together, Lucy and Milo become entwined in a mystery that threatens to engulf the whole town of Sticky Pines and its weird and wonderful residents. Sticky Pines." #bookpost #bookblogger #mgfiction #books #freebie #childrensbooks #childrensfiction #mystery
So stunning #MermaidMoon by #susanncokal 🧜🌙 • Published by @walkerbooksya @walkerbooksuk An award-winning author tells of a #mermaid who leaves the sea in search of her landish mother in a captivating tale spun with beautiful prose, lush descriptions, empathy, and keen wit. "Blood calls to blood; charm calls to charm. It is the way of the world. Come close and tell us your dreams. Sanna is a mermaid — but she is only half seavish. The night of her birth, a sea-witch cast a spell that made Sanna’s people, including her landish mother, forget how and where she was born. Now Sanna is sixteen and an outsider in the seavish matriarchy, and she is determined to find her mother and learn who she is. She apprentices herself to the witch to learn the magic of making and unmaking, and with a new pair of legs and a quest to complete for her teacher, she follows a clue that leads her ashore on the Thirty-Seven Dark Islands. There, as her fellow mermaids wait in the sea, Sanna stumbles into a wall of white roses thirsty for blood, a hardscrabble people hungry for miracles, and a baroness who will do anything to live forever." #bookpost #bookblogger #booksofinstagram #mermaid #fairytale #fantasyfiction #freebie #fantasystory #mermaids #books📚
PARABLE OF THE SOWER: A #GRAPHICNOVEL ADAPTATION by Octavia E. Butler Thank you @abramschronicle @abramsbooks This looks amazing 😊 "The follow-up to Kindred, the #1 bestseller, comes Octavia E. Butler’s groundbreaking #dystopiannovel In this graphic novel adaptation of Octavia E. Butler’s Parable of the Sower, by Damian Duffy and John Jennings, the award-winning team behind the #1 bestseller #Kindred: A Graphic Novel Adaptation, the author portrays a searing vision of America’s future. In the year 2024, the country is marred by unattended environmental and economic crises that lead to social chaos. Lauren Olamina, a preacher’s daughter living in Los Angeles, is protected from danger by the walls of her gated community. However, in a night of fire and death, what begins as a fight for survival soon leads to something much more: a startling vision of human destiny... and the birth of a new faith." Adapted by #DamianDuffy #Illustrator #JohnJennings Introduction by #HopkinsonNalo #bookpost #bookblogger #booksofinstagram #freebie #amreading #books📚 #booklover
This morning I *finally* made an attempt at sorting out my towering #tbr 📚 A while back @illumicrate included a #ReadMe #Book Jar and this morning I made notes for it. Options include #bookgenres like #historicalfiction, #contemporary, etc to choosing a book per #author or cover-colour. I hope this inspires some new and #rereading How do you tackle your #TBRpiles 📚📚📚 #bookblogger #reading #amreading #blogger #bloggerlife
Surprise #bookpost from @nosycrow #TrooFriend by @kirstyapplebaum "Imagine having the perfect friend, one who never steals, lies or bullies. Now you can, with the TrooFriend 560, the latest in artificial intelligence! What can go wrong with a robot buddy? Especially one that’s developing human characteristics and feelings, and who has just run away with her human?" • Publishes April 2020 #bookblogger #booksofinstagram #mgfiction #childrensbooks #book