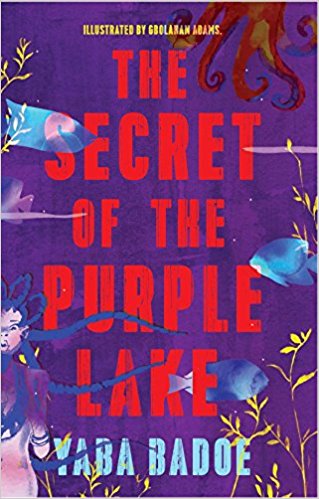 The Secret of the Purple Lake is a collection of five interlinked stories that take us from Ghana to Orkney, and from Spain to Norway and Thailand. As a minor character from one story assumes a major role in the next, we meet a fascinating cast, including Imoro the magic elephant, the Walrus Prince, and the Wild Princesses of Rousay. The protagonist of the opening tale, The Fisherman’s Daughter, has to retrieve her dead father’s bones from the bottom of the sea, in order to bring harmony back to her seaside village. In fulfilling her task, she must evade the clutches of The Fish-man of the Purple Lake. The Fish-man, a monstrous creature with the body of a man and the head of a fish, was once a beautiful boy from the Sahel, and has his own story about how he became the Fish-man.

I began writing The Secret of The Purple Lake at a time when I was beginning to wonder if working in television was really what I wanted to do. Back then I was a director at the BBC. TV production is 24/7, 100% all consuming. And yet, once in a while, whenever I allowed my imagination to roam, I’d find myself enchanted with the sheer pleasure of telling stories in prose.  Not that telling stories with pictures isn’t fun.  There’s a crucial difference. Television is an essentially collaborative medium in which extroverts thrive, while using words to tell stories requires imagination and discipline best suited to introverts. Or so it seems to me now. All the same, every now and again, whenever I needed to recharge my batteries and take stock, I’d find myself playing with words and making up stories.

Maybe that’s because I come from a family of storytellers. My grandmother on my maternal side, Mame Soma, used to keep me enthralled as a child with Ananse stories. My mother, a part time broadcaster, wrote short stories for one of Ghana’s first woman’s magazine, Ideal Woman; a magazine created by my aunt, the writer and publisher, Kate Victoria Abbam. My mother, an agony aunt to Ideal Woman, was also a voracious reader. I’m convinced it was her love reading, which she instilled in me, that helped me survive when I was sent to boarding school in England as a child.

A book that I loved above all others at prep school, the book that’s had the biggest impact on me, was an illustrated edition of Grimm’s Fairy Tales. I must have read it when I was about 7 years old. It seemed enormous at the time: ancient and musty with large, whimsical illustrations protected by cellophane. I was 7 going on 70, but what I remember clearly is hugging a radiator to ward off the Devon damp and cold, while I wallowed in a world of lost children, ogres, wood-cutters, wicked step-mothers and beautiful princesses. I devoured the stories and I reckon they’re to blame for my love of gothic melodrama and horror movies.

Ever since then, I’ve been a huge fan of the Brothers Grimm. I’m particularly fond of Hansel and Gretel, a terrifying story that still gives me a frisson every time I read it.

The Secret of the Purple Lake is a collection of five interlinked fairy stories that took me on a journey from Ghana to Orkney, Spain to Norway and then Thailand. The collection grew as a minor character from one story assumed a major role in the next.

Ajuba, The gutsy heroine in the opening tale, The Fisherman’s Daughter, has to retrieve her dead father’s bones from the bottom of the sea, in order to bring harmony back to her seaside village.  But first she has to endure untold dangers. She has to teach an octopus how to dance, uproot a carbuncle for a whale and then drop the carbuncle in the Purple Lake, without the Fish-man, who guards the lake, slaying her. The Fish-man, a monstrous creature with the body of a man and the head of a fish, was once a beautiful boy from the Sahel,

After I finished The Fisherman’s Daughter – I realized that I wanted to know more about the Fish-man. Where did he come from? How did he end up as a Fish-man? Would he always be an underwater creature or would fate take pity on him?

I felt the same way after I’d written The Wild Princesses of Rousay, a story about a family of rebellious Orcadian princesses. When Jael’s suitor, Leo of the Norselands, is transformed in to a walrus to save him from drowning, I couldn’t help wondering if he’d ever return to his human state. And what of Jael’s mother, Romilly, who turned into a golden eagle, having thrown herself from a turret of Trumland Castle? I wanted to find out more about these characters, so eventually I gave them their own stories.

I still spend some of my time making films, even though I enjoy writing as well. I hope you’ll get as much pleasure reading The Secret of The Purple Lake as I did creating my characters. 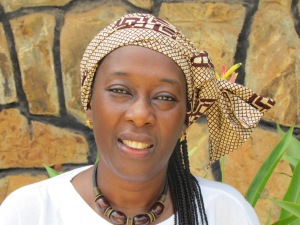 Yaba Badoe is an award-winning Ghanaian-British documentary filmmaker and writer.

In 2014 Yaba was nominated for the Distinguished Woman of African Cinema award. She lives in London.