A powerful and moving exploration that draws the young reader into each stage of the journey, inviting the chance to imagine the decisions he or she would make.

From the winner of the V&A Student Illustration Award 2016.

Why did you want to write My name is not Refugee?
I was moved by the plight of Refugees coming across Europe from Syria and enraged by the sort of coverage they were getting in some parts of the press. I wanted to do something to help but I’m not very practical. If I turned up in a Refugee camp full of good intentions I would be worse than useless. Anything I built would fall over, I’d lose my car keys and start crying. The only way I could think of helping was to make a story for children which explains the idea of refugee, and points out that Syrian children are not invading zombies sucking all the life blood out of our country. They are just children.

Do the illustrations come first, after, during the writing of the story? Would you talk (write?) us a little through the process of creating illustrations for your own book?
I wanted to make pictures that showed what it must feel like to be a child refugee. I produced three illustrations very quickly, one based on TV images of Refugees sleeping on German train stations, one showing how bewildering it is to find yourself in a place where you don’t understand a word that is said to you, and one about being offered food you don’t recognise. These images seem to arrive in my visual imagination more or less fully formed I think, partly because I felt very strongly about the project and I knew exactly what I wanted the images to communicate. These three images were the kernel of the book and I’m pleased to say they won the Victoria and Albert student illustration award for 2016. After that it was all about getting to know my little refugee boy through drawing him from every angle and in every mood.

What’s it like to hold a finished copy of your book?
Fab. Although, to be honest, getting a picture book into the book shop is very much a collaborative effort. The lovely designers and editors at the publishers have all contributed. I think of it now as our book rather than just mine and I am very proud of it.

Tell us something about yourself that not many people know:
When I was very much younger I was the nanny for the young daughter of two of the actors from the Archers. She and I spent many a happy afternoon drawing pictures on the back of Archers scripts.

When you were growing up were there did you find the books you wanted/needed?
My mum loved books and read the classics to my sister and I, the Hobbit, The Lion the Witch and the Wardrobe, and, particularly the Little House on the Prairie series by Laura Ingles Wilder which she loved because she had also spent her childhood on the Canadian prairies.

Are there any books you want to recommend?
I would always recommend Jacqueline Wilson’s stories. She is so brilliant, a real humanitarian. Her stories are an education for girls about how to cope with modern life. They are also, I discovered while reading them to my daughters, an education about how to be a mother to a girl.

What’s the perfect cure for a bad day?
Dancing. There is no day that a bit of dancing won’t improve. When I worked in my local library it was sometime my job to get the place ready for the day, turn on the lights, fire up the computers, and empty the bins. I mostly did this with loud dance music on my i-pod. It was magical to dance alone around a silent library, it never failed to cheer me up.

I’m giving you a free platform to talk about anything – GO:
Wow, I am struck dumb by the hugeness of this opportunity. Here we go…Dear young people, all those things your elders tell you matter so much, grades, achievements, ambitions, looks, debt and ownership are completely idiotic. Your elders have royally screwed up the world and themselves, you should listen to them and then do the opposite.

What do you want readers to take away from My name is not Refugee?
(The intended audience but also those reading to them, and any others that pick it up.)
We must not punish children for the god awful mess all those arrogant self righteous men with guns are making of this world. 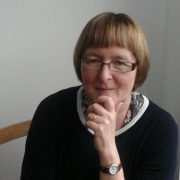 Kate Milner studied illustration at Central St Martin’s before completing an MA in Children’s Book Illustration at Anglia Ruskin University. Her work has been published in magazines, and her illustrations and prints have been shown in London galleries and national touring exhibitions.

Kate won a V&A Illustration Award in 2016 for My name is not Refugee.