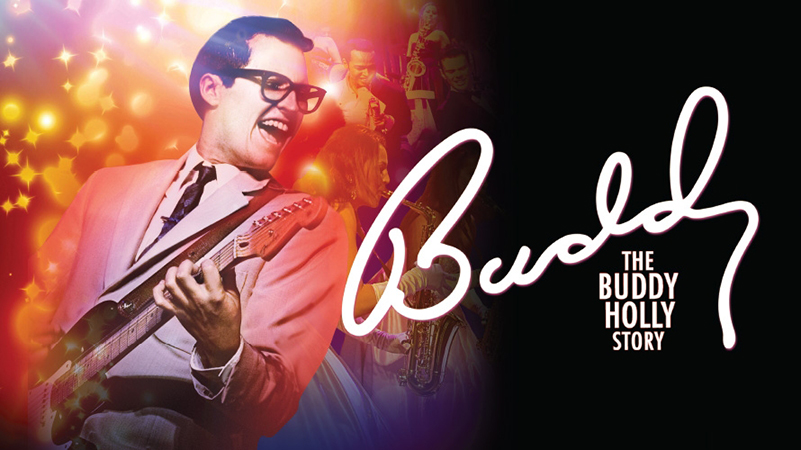 Buddy – The Buddy Holly Story Tells The True Story Of Buddy’s Meteoric Rise To Fame, From The Moment In 1957 When ‘That’ll Be The Day’ Hit The Airwaves Until His Tragic Death Less Than Two Years Later On “The Day The Music Died”. The Show Features Over 20 Of Buddy Holly’s Greatest Hits Including ‘That’ll Be The Day’, ‘Peggy Sue’, ‘Everyday’, ‘Oh Boy’, ‘Not Fade Away’, ‘Rave On’ And ‘Raining In My Heart’, Plus Ritchie Valens’ ‘La Bamba’ And The Big Bopper’s ‘Chantilly Lace’.

The Incredible Legacy Of The Young Man With Glasses, Whose Musical Career Spanned An All-Too-Brief Period During The Golden Days Of Rock & Roll, Continues To Live On In Buddy.

It’s been a long time since I’ve seen a standing ovation at the end of a musical but on Monday people in the stalls and circle were on their feet dancing, clapping and singing (some next to me very off-key). As we left the theatre all I kept hearing was, in snatches of passing conversation, how brilliant the show was.

Everything about this production worked. The cast WHOLE are excellent and Joe Butcher (as Joe B Maudlin) and Josh Haberfield (as Jerry Allison) are amazing. Alex Fobbester as Buddy is great and by the time Jordan Cunningham (as Ritchie Valens) and Thomas-mind-the-gap-Mitchells (as The Big Bopper) take to the stage it became a party.

As a night out Buddy – The Buddy Holly Story is definitely a must.

The Full Monty is at THE GRAND, Blackpool until the 25th February 2017