A tradition of folk stories

Okay I’ll confess. I’m a prankster. My mum was one and her mother-in-law, my Gran was one too. In India, we celebrated April Fool’s Day with much enthusiasm. Yes we did! At least in our family. If you didn’t remember the date as soon as you woke up, you’re doomed!

One year, I had actually forgotten it was April Fool’s Day when I woke up. Normally the daily calendar would be torn to reveal the new day first thing in the morning. And that day my Gran and my mum deliberately had left it on 31st March.

Every morning, all children are given a glass of milk with Boost. It was the drink of warriors, conquerors and high-achievers. No, I’m joking. Kids are not given tea or coffee until they are 18. So we drink milk with some flavour – like Horlicks or Bournvita – and our house had chosen Boost – the Secret of My Energy.

How to make the best Boost Drink – Here is a recipe.

Step 1: Heat fresh milk and bring to a boil.

Step 4: Stir fast so Boost granules and sugar turn the milk into a brown and foamy drink.

But if is April Fool’s Day, Replace Sugar in Step 2 with Salt. That’s what Gran did.

The first rule of April Fool’s Day prank is the surprise element. So an unsuspecting, sleepy 8 year old who is nagged to drink the milk will gulp it down in big mouthfuls. And spit all of it on her gran’s sari. Well, she should have known better! That was a double prank.

I never outgrew my prank-playing streak. I am more restrained nowadays and my pranks are geeky and my victims are close family or friends who do have a sense of humour. I’ve warned you now! So if you’re anywhere near me on 1st April, you’re fair game.

So it is fair to say I love pranks and in that tradition, trickster tales. As a storyteller I gravitate towards trickster tales – from all cultures and countries. They’re not just clever and funny. They are also complex. It’s not easy to find an alternate ending to these tales because they have one ingredient that is unique to folktales – no, not salt. It’s wisdom. Like salt, a pinch would do for wisdom and justice too.

If you read A Jar of Pickles and A Pinch of Justice or the first book in the series A Dollop of Ghee and a Pot of Wisdom, that’s what you will get. 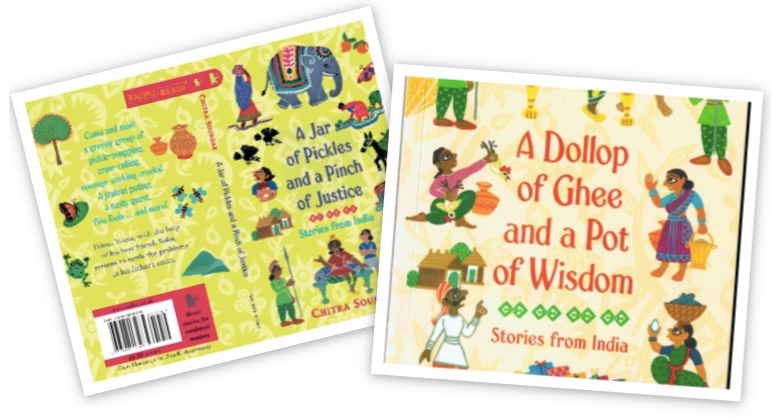 Each story in the collection poses a problem and needs a trickster’s clever ruse to find the answer. The tricksters in these stories are on the right side of justice and are two boys – Prince Veera and his best friend Suku. Together they sort out problems in their father’s court and fight against the injustice they see, not with harsh words and anger but with the deviousness of tricksters.

Prince Veera and Suku are close friends, in spite of their differences. They have the same passion for justice like all young people. And they have the humour and cheekiness to deceive the villains, much to the amusement of others.

So whether you’re a successful prankster or a budding one, you will definitely enjoy the puzzles that Prince Veera and Suku are asked to solve. See if you can come up with an alternate ending that is more satisfying and cleverer than the ones they came up with.

Stories are everywhere and are for everyone. Stories are how we understand the world around us and the people around us. We tell stories all the time, knowingly or not. Chitra too, tells stories all the time. Sometimes she puts them into books too. Many of her books are set in India where she was born and brought up.
Chitra goes into classrooms, bookshops and libraries to tell stories, and teach creative writing.

Prince Veera and his best friend, Suku, are left in charge of King Beema’s court when the king goes off on a hunting trip. Each day the king’s subjects come before the boys with their problems and petty disagreements. Can Veera and Suku settle the dispute between the man who sells a well – but not the water in it – to his neighbour? Or solve the mystery of the jewels that have turned into pickles? And what about the old washerwoman who is set the task of washing the king’s elephants until they turn white?

These clever, funny trickster tales, full of humour and colour, are sure to delight.

A Jar of Pickles and a Pinch of Justice by Chitra Soundar (£5.99, Walker)