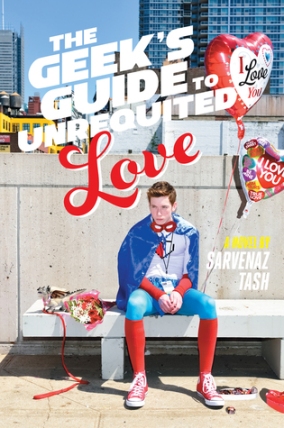 Graham met his best friend, Roxana, when he moved into her neighbourhood eight years ago, and she asked him which Hogwarts house he’d be sorted into. Graham has been in love with her ever since.

But now they’re sixteen, still neighbours, still best friends. And Graham and Roxy share more than ever—moving on from their Harry Potter obsession to a serious love of comic books.

When Graham learns that the creator of their favourite comic, The Chronicles of Althena, is making a rare appearance at this year’s New York Comic Con, he knows he must score tickets. And the event inspires Graham to come up with the perfect plan to tell Roxy how he really feels about her. He’s got three days to woo his best friend at the coolest, kookiest con full of superheroes and supervillains. But no one at a comic book convention is who they appear to be…even Roxy. And Graham is starting to realize fictional love stories are way less complicated than real-life ones.

Review: The Geek’s Guide to Unrequited Love will be a book that will from now on have me pushing it onto people saying: “This made me happy. You read it.” So this is me, doing exactly that. Seriously – Read it.

Graham has the perfect plan for how to tell his best friend Roxy he loves her. It’s going to be so amazing that she’ll be swept of her feet and in his arms. Like the romantic movies basically. Only if you’ve ever been to any kind of Con, you’ll know that planning and execution don’t match up. Also people, even those you think you know really well don’t behave the way you plan.

I pretty much adored Sarvenaz Tash book from the start. It has all the ingredients: 3D characters (not just Graham and Roxy but everybody), great pacing, excellent location, character growth, ‘aww’ moments, COSTUMES and I adored the story. When you leave the book feeling like you’ve made friends it’s pretty good.

So remember – READ The Geek’s Guide to Unrequited Love.