Two megastar masters of words and art, Michael Rosen and Chris Riddell (recently announced Children’s Laureate 2015 – 2017) join up to celebrate their first book together – A Great Big Cuddle. Listen with delight as Michael performs the poems from the book, and watch with awe as Chris draws live on stage. Interactive, entertaining and lively. Guaranteed!

Roaring applause and a packed auditorium greeting Michael Rosen and Chris Riddell for their A Great Big Cuddle event. This was the very first Bath Children’s Literature Festival event I attended and it was the best way I could hope to start the festival. 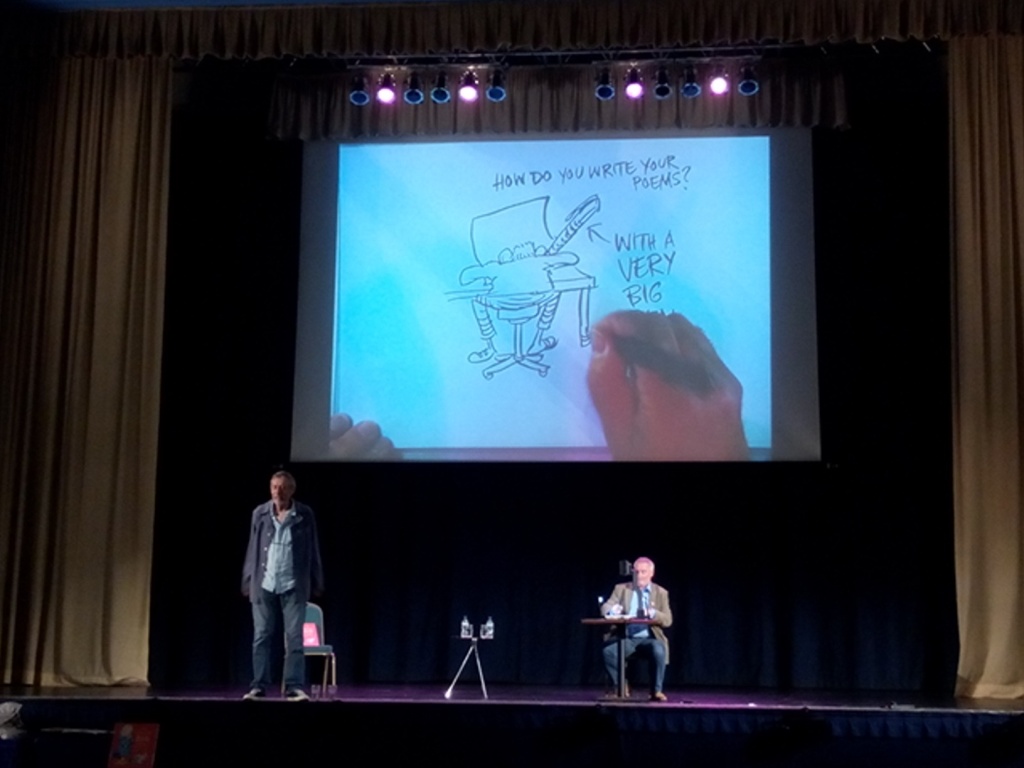 As Michael Rosen conversed with the audience Children’s Laureate Chris Riddell would draw, so the jam bath was the first picture to be projected on the screen above the stage.

Laughter as well as delightful cheering was continues throughout the hour long event. Not just from the younger members of the audience. There were a few jokes for the parents in Chris Riddell’s drawings.

The A Great Big Cuddle with Michael Rosen and Chris Riddell was so engaging!

Michael Rosen and the audience would rad through the poems, so we went: “hop, hop, hop, hop” as Chris Riddell drew the accompanying artwork.

Ever so often there would be little adaptations to said artwork, Michael Rosen featuring in them on more than one occasion. The best one of course had to be morris dancing Michael Rosen with the phrase: ‘Michael will now demonstrate’ – which Michael Rosen did.

There are so many other moments I could list, the story of the sofa diving mini-Rosen, ‘the noise’, etc but I think the best way to end this review is by quoting what the lady and her daughter in the row behind said behind me said: