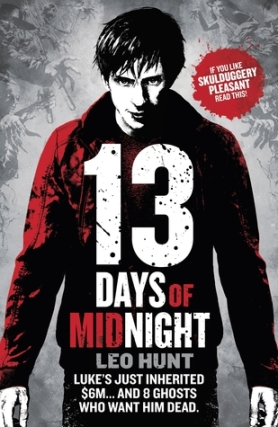 Synopsis: When Luke Manchett’s estranged father dies suddenly, he leaves his son a dark inheritance. Luke has been left in charge of his father’s ghost collection: eight restless spirits. They want revenge for their long enslavement, and in the absence of the father, they’re more than happy to take his son. It isn’t fair, but you try and reason with the vengeful dead.

Halloween, the night when the ghosts reach the height of their power, is fast approaching. With the help of school witchlet Elza Moss, and his cowardly dog Ham, Luke has just thirteen days to uncover the closely guarded secrets of black magic, and send the unquiet spirits to their eternal rest. The alternative doesn’t bear thinking about.

200words (or less) review: Leo Hunt’s 13 Days of Midnight is a bit of a mixed read for me. It’s an easy enough story to get into and before you know it 50 pages have flown by, so that speaks for the book.

Personally I didn’t particularly like Luke, especially at the start. Also for the first couple of chapters there was a lot of “I did” and “I” at the beginning of sentences, it stuck out so it became a thing – at least it felt like it to me. As more characters same into play this lessened, or maybe I got used to it. Either way the second half of the book was a lot more enjoyable.

I liked The Host a lot, the different characters within. Not all of them get equal share in the story; it’s mostly focused on four. All the background and world building around this was really intriguing, I would have loved to have delved deeper. The ending of 13 Days of Midnight implies that there is the possibility for a sequel so maybe that could be explored there?

Sitting in the garden and reading #amanandthiscat #manga
Surprise #bookpost from #everythingwithwords
New #bookpost has arrived, thank you @bloomsburychildrens
Not feeling too great so snuggled up with #books
This is Pepper.
Happy #Caturday