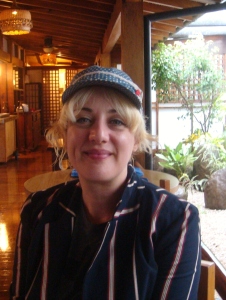 Tatum Flynn lives by the sea in England with a cat called Friday and too many hats. She has a soft spot for the word ‘ramshackle’, and a vagabond past which involves piloting lifeboats in Venezuela, playing poker in Las Vegas, shooting rapids in the Grand Canyon and almost falling out of a plane over Scotland.
Her debut, THE D’EVIL DIARIES, is out now from Orchard/Hachette, with a sequel, Hell’s Belles, to follow January 2016. Find her on Tumblr (sometimes) and Twitter (far too often).

Why did you want to write the The D’Evil Diaries?
I sold my soul for fame and fortune, but the catch was Lucifer insisted I put him in a book. You don’t argue with the King of Hell. Well, not unless you want your toes toasted like little marshmallows for all eternity.

And was there always going to be a sequel?
I had the idea for the sequel whilst writing the first book, but it wasn’t actually going to get written unless a publisher bought it. Which Orchard Books did, happily. Also, I’d originally considered writing The D’Evil Diaries from Tommy’s point of view, and in Hell’s Belles I got to write from both her and Jinx’s pov, which makes me happy, because to me she’s much more than just a sidekick.

Would you be a good demon?
(Or is it bad demon? I mean the opposite of Jinx basically…)
I would probably be a lot like Loiter, who has done some bad things, but is generally too lazy to be evil and when he does do something it usually involves throwing a spanner in other demons’ nefarious plans just for fun.

The first time you saw your book in a shop, what did you do?
I’m supposed to say I burst into tears or kissed the ground or something, aren’t I? But to be honest, the most exciting thing for me was when I saw my page proofs, complete with preliminary illustrations. That’s the first time the book really felt real to me.

Most surreal moment on your publishing journey?
I have yet to be blurbed by Neil Gaiman or courted by Hollywood, so I’m not sure anything’s been surreal yet, though I live in hope. Although managing to get a book deal for a kid’s book set in hell in the first place was definitely pretty surprising.

Tell us something about yourself that not many people know:
I was a poker player for years before writing novels. Bluffing is basically trying to tell a believable story so it was good practice, although the life of a writer sadly necessitates fewer trips to Vegas.

Best thing about being a writer?
A friend who’d recently lost a parent told me reading my book comforted her. Another friend told me he caught his ten-year-old son reading The D’Evil Diaries under the covers with a torch after bedtime. An eight-year-old girl drew me a picture of Loiter. These sort of responses make me very very happy.

And the worst?
Writing doesn’t get any easier the more books you write. Which seems unfair.

I’m giving you a free platform to talk about anything – GO:
FUNNY BOOKS. Funny books are wonderful, and laughter keeps us sane and allows us to poke fun at all sorts of terrible things, and just because a book is funny doesn’t also mean it can’t be intelligent and give you feels. Some of the cleverest books out there are satire, and some of my favourite stories sneak wisdom in under the guise of humour. And basically a big reason I write for kids is because kidlit has way more humour than adult books and is thus wildly superior.

What happens now?
Um, I go and feed the cat before she claws my face off? Oh, you mean writing-wise. I’m currently editing the aforementioned sequel, Hell’s Belles, which is out in January 2016, then I’m writing a new funny MG about a family of ghosts, involving a poltergeist who’s a neat freak which is a bit of a problem for him.

A hilarious, crackling, original debut about an unlucky demon, perfect for fans of Derek Landy and Eoin Colfer.

Twelve-year-old Jinx is hopeless at being evil. Which is a bit of a problem when you’re Lucifer’s youngest son. But when Jinx runs away from Pandemonium, the walled city he’s lived in all his life, he bumps into dead girl Tommy – who’s been sent to Hell for accidentally feeding her nasty uncle to a circus lion – and unearths a conspiracy that could up-end the entire underworld.

Cue shenanigans involving carnivorous carousel horses, death-trap-riddled libraries and hungry quicksand. Now the fate of the realm rests in the hands of its most unlikely demon and a girl who shouldn’t be in Hell at all…

Tea or coffee?
Chilled coffee. It’s possible I have a tiny addiction.

When no one is watching do you dance?
Yes, usually to loud music whilst cooking, and occasionally when I get good news. Unfortunately my cat is always watching, and my jumping about make her go

so I have to keep a lid on it.

Favourite Las Vegas Casino?
Vegas is stuffed full of ridiculous edifices shaped like giant sphinxes or with rollercoasters on the roofs, but my favourite is probably the Venetian, which is just stunning in its over-the-topness.

What magic power would you like?
Immortality, but I’d settle for achieving it through my books.

I say MG Strikes Back, you say:
The world’s best kidlit blog! READ IT OR PERISH. Probably.

What word describes you best?
Incorrigible.

Book you’re most excited about this year?
Well, MINE, obviously 😛 Two of my supertalented critique partners also have books out this year – I realise that sounds biased, but bear in mind they’re my CPs because I initially fell in love with their writing – NK Traver’s stunning YA cyberthriller Duplicity, and Rachel Hamilton’s hilarious MG The Case of the Exploding Brains.

Do you ever re-arrange bookshop displays?
Certainly not what kind of person do you take me for. *cough*

What’s the perfect cure to a bad day?
Jason Momoa turning up on my doorstep with tickets to Mexico? Well you did say the *perfect* cure.

And finally, what is the question you wish people would ask and never do?
Ms Flynn, how do you manage to write such brilliantly funny books whilst also being such a wonderful person who oddly looks ten years younger than you are?

You haven’t read The D’Evil Diaries?

One thought on “Interview with Tatum Flynn & Giveaway”