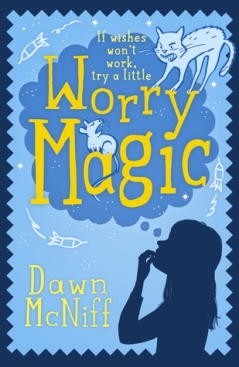 How did I get the book?
Received from publisher in exchange for an honest review

Synopsis: Courtney is a worrier – she’s worried about EVERYTHING, from her mum and dad’s constant fights, to her Gran being ill to the fact that her best friend Lois suddenly seems to be more interested in growing up and hanging out with mean girl Bex.

But then one day, during a particularly bad argument kicked off by her dad’s discovery of a pig in their lounge (don’t ask…) Courtney begins to feel a bit funny… a bit woozy… a bit like a dream is coming on – and then when she wakes up everything is better! Mum and dad are being nice to each other, the pig is going back to the animal shelter (really, don’t ask…) and even Kyle, her older brother, seems to be making an effort.

Courtney becomes sure that each time she feels woozy and has her dreams, she’s magicking her problems and worries away. Her mum, dad and brother aren’t so sure though. Can Courtney convince everybody that her worry magic dreams are the perfect way to solve her problems? Or should she learn to worry a little less and to ask for help in some non-magical places more?

Review:  Just like Little Celeste this book is a quick and endearing read. Courtney is a likeable narrator who worries about her grandmother being in hospital and her parents constant arguing. Courtney tries to prevent these arguments but it’s not working.

The book begins with Courtney’s mother having bought a pig home from the sanctuary she volunteers at, it’s a micro pig but it’s still a pig and Courtney’s father has been quite clear on no more animals. Of course as soon as he gets home her parents argue, only this time Courtney “falls asleep” as she calls it and has a fragmented dream which seen a happy calm family. When she wakes up it comes true – it’s magic.

Courtney’s ‘worry magic’ continues to come true whenever she has these dreams. But is it really magic? Courtney is quite a young narrator, so her faith in this magic is believable. As the story continues Courtney learns that not everything is fixable. There were a few moments in the book I really appreciated, like when Courtney went to find her father.

And this my book review if it wasn’t for one particular sentence:

I didn’t touch on this before because while I did enjoy Worry Magic but it was overshadowed from p52 onwards by that “diagnosis”. Courtney says she falls asleep, as far as the rest of her family is concerned she faints.  Above is the doctor’s diagnosis.

I’m right bang in the middle of CBT (that’s Cognitive Behavioural Therapy) for Anxiety and this includes panic attacks which I’ve had for the last 2 years. They are horrible and terrifying but fainting is not common. In fact one of the first things I learned was that panic attacks don’t generally cause you to faint. Knowing that actually helped me.

Regardless of Courtney’s own belief in magic a medical professional is giving a diagnosis in this book. A diagnosis of “classic panic attacks” is wrong. Courtney doesn’t like this doctor, she refers to him as Dr Plop (he’s actually Dr Prop) so if Dawn McNiff’s intention is/was to undermine him by making the diagnosis wrong that’s fine but there should be a disclaimer somewhere. There isn’t. Courtney might not be having panic attacks but the “adults” in her world think she is and the doctor is stating that fainting is “classic” panic attack that’s just… – no!

The information in Worry Magic is wrong. As far as the book is concerned a doctor diagnosis a young girl with classic panic attacks but there are no warning bells going off about the fainting. The prescription? “keep her stress levels down”

This worries me ok. I’m sorry but it does. As a reader you have a certain trust that what you read is correct, at least in contemporary stories. If Worry Magic was set in a  land of Dragons and Purple Dandelion Fairies I would not be harping on about this, in such a land fainting might be classic in panic attacks.

I’m no expert on panic attacks but I believe that the hand-outs/leaflets I’ve been given by the NHS as part of my CBT are true. I also believe the person who is treating me and if that wasn’t enough a quick search on google confirms that fainting isn’t ‘classic’.

So I feel justified in my sadness over Worry Magic. All it needed was a little note explaining Dr Prop/Plop was wrong because just what if someone thinks panic attacks and fainting go hand in hand? I’d hope you’d seek medical advice for both but if you’re fainting its important because it’s not the norm.

One thought on “Worry Magic by Dawn McNiff”