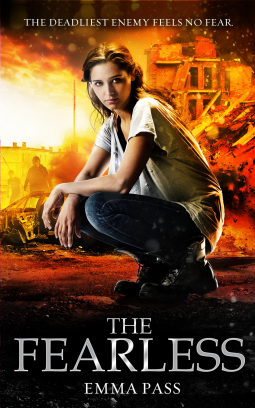 How did I get the book?  Received from publisher in exchange for an honest review.

Synopsis: The Fearless. An army, powered by an incredible new serum that makes each soldier stronger, sharper, faster than their enemies. Intended as a force for good, the serum has a terrible side-effect – anyone who takes it is stripped of all humanity, empathy, love. And as the Fearless sweep through the country, forcing the serum on anyone in their path, society becomes a living nightmare.

Cass remembers the night they passed through her village. Her father was Altered. Her mother died soon after. All Cass has left is her little brother – and when Jori is snatched by the Fearless and taken to their hellish lair, Cass must risk everything to get him back.

200words (or less) review: The Fearless is certainly a gripping read. The book begins with a young Cass witnessing her father being attacked and Altered as they try to escape The Fearless. It’s the night her little brother Jori is born, fast forward a few years and Cass is living Hope Island. Cut from the mainland they exist in relative peace until Jori is snatched by the Fearless and Cass goes after him.

The book is narrated by Cass, Sol (Cass’s childhood friend) and Myo. Most of the narration is by Cass so she is the character I felt closes to, but I liked Myo from the beginning. The different viewpoints work well within the story.

Cass is a strong character and the relationship between her and Myo works. It’s tested, tested again and let’s throw a few more things in there for good measure. Reading The Fearless was never boring, I finished the book in one sitting because I had to know how it ended.

The Fearless will have your attention from the very first page and you won’t want to put it down.