Thank you to Disney-Hyperion for providing review copies for Chrissi & me. 🙂 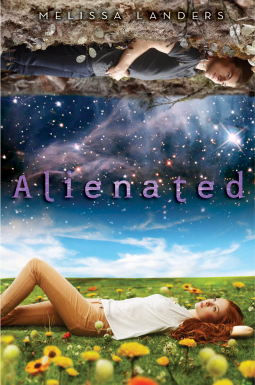 Two years ago, the aliens made contact. Now Cara Sweeney is going to be sharing a bathroom with one of them.

Handpicked to host the first-ever L’eihr exchange student, Cara thinks her future is set. Not only does she get a free ride to her dream college, she’ll have inside information about the mysterious L’eihrs that every journalist would kill for. Cara’s blog following is about to skyrocket.

Still, Cara isn’t sure what to think when she meets Aelyx. Humans and L’eihrs have nearly identical DNA, but cold, infuriatingly brilliant Aelyx couldn’t seem more alien. She’s certain about one thing, though: no human boy is this good-looking.

But when Cara’s classmates get swept up by anti-L’eihr paranoia, Midtown High School suddenly isn’t safe anymore. Threatening notes appear in Cara’s locker, and a police officer has to escort her and Aelyx to class.

Cara finds support in the last person she expected. She realizes that Aelyx isn’t just her only friend; she’s fallen hard for him. But Aelyx has been hiding the truth about the purpose of his exchange, and its potentially deadly consequences. Soon Cara will be in for the fight of her life—not just for herself and the boy she loves, but for the future of her planet.

Thoughts before you started reading Alienated?
CHRISSI: The cover is so pretty! I want!

LUNA: “Oh look at the pretty cover.” I know that’s not a good way to pick a book but that’s what caught my attention, the synopsis sounded promising.

What did you think of Cara & Aelyx as characters?
CHRISSI: I took a while to warm to Cara and Aelyx. They were both quite slow burning characters, but towards the middle of the book, I began to really like them both and overall I liked Aelyx a little bit more!

LUNA: I wouldn’t say I was overly fond of either at the beginning, though Cara is easier to like than Aelyx. She’s feisty and keeps her swooning to a minimum, which earns her extra points from me. Aelyx might be gorgeous but doesn’t have a lot going for him until Cara begins to crack through his armour. He’s a bit like Spock with a giant superiority complex.

Best bit?
CHRISSI: I thought Alienated was a really easy to read book. I think this is what made me like it so much. The writing flowed really nicely, the plot was good and the characters were likeable!

LUNA: Melissa Landers took me by surprise, the tension between the those for the alliance with L’eihr and those against, especially HALO, changes dramatically through the book.
Little references such has the exclusion Cara’s parents receive, the family having to travel outside of town to get groceries made more of an impact than HALO’s organised vandalism and protests – because these were not fanatics but ordinary people. Alienated is much darker than I anticipated, making the book so much more.

LUNA: When I finished the first chapter I felt I could have told you the plot of the book. I wasn’t completely right (thankfully) but Cara & Aelyx relationship pretty much turned out the way I predicted – which is a little boring. That being said I did believe the chemistry between them.

Favourite character / moment?
CHRISSI: I grew to really like Aelyx. I don’t know what it was about him. It’s definitely not a ‘book boyfriend’ thing. I just found him extremely likeable and loved his interactions with Cara.

LUNA: Despite the fact that he has a few appearances Eron really made an impact on the story. The communication’s he has with Aelyx when he talks about his host family, especially his little brother are so sweet. Apart from that I wanted more of Ashley, hopefully she’s got a bigger part in the next book.
I think my favourite moments are Cara’s attempts to cook for Aelyx. They did make me chuckle.

Was Alienated what you expected?
CHRISSI: I think I’m opposite to Luna with this one (which doesn’t often happen!) I expected more from it. I enjoyed reading it, but I was expecting to really be gripped by it from the start. That said, the writing did pull me in and keep me there once it got me!

LUNA: Actually it was better. The writing really pulls you in, I flew through the book in a few hours without any breaks.

Would you recommend it?
CHRISSI: Yes!

LUNA: Yes, I also want to see how this series turns out.

One thought on “Alienated by Melissa Landers”