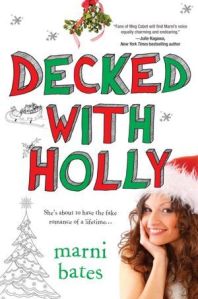 Synopsis: Taking a Christmas cruise with her two cousins from hell isn’t Holly’s idea of a good time. And when seasickness forces her into an open suite, she’s pepper-sprayed by a gorgeous guy called Nick. But when Holly makes her exit, she’s greeted by a horde of screaming teenage fans. Because Nick happens to be Dominic Wyatt, drummer for one of the hottest bands in America. Suddenly rumours are swirling and Holly’s face is plastered all over the Internet. The band can’t risk a scandal destroying their family-friendly image, so Dominic convinces Holly to be his fake girlfriend – just for two weeks. How bad could it be to be “fauxmantically” involved with a cute rock star? She’s about to find out…

200words (or less) review: I put Decked with Holly on my wish-list earlier this year after reading Awkward. I adore Marni Bates writing, it only takes a few pages and I’m so engrossed I don’t notice the time passing.

Decked with Holly is a perfect seasonal read. It’s fun and cute and just the thing to put you in a happy mood. Unlike Marni Bates’s other books this one is a dual narration. For me it worked, I enjoyed having Nick’s perspective. Both characters are easy to like and while you know there will be a happy ending the journey getting to it isn’t boring.

I really liked Holly, she is insecure but still strong. The relationship between her and Nick works well. The frustration, teasing and then, they slowly realise the other isn’t actually that bad. On a side note, Jen (Holly’s best friend) is brilliant. I loved her.

From the Elf vs. Santa debacle in the opening chapter, Decked with Holly delivers laughter, happiness and just the right amount of romance.