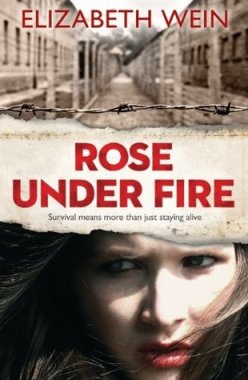 How did I get the book? Netgalley, thank you @ Disney Book Group.
I also bought my own copy.

Synopsis: Rose Justice is a young American ATA pilot, delivering planes and taxiing pilots for the RAF in the UK during the summer of 1944. A budding poet who feels most alive while flying, she discovers that not all battles are fought in the air. An unforgettable journey from innocence to experience from the author of the best-selling, multi-award-nominated Code Name Verity. From the exhilaration of being the youngest pilot in the British air transport auxiliary, to the aftermath of surviving the notorious Ravensbruck women’s concentration camp, Rose’s story is one of courage in the face of adversity.

200words (or less) review: I knew this book wasn’t going to be an easy read. Code Name Verity is such an amazing and heart-breaking book and I expected the same from the companion novel, Rose Under Fire.

The story is narrated by Rose Justice a young American pilot who ends up in Ravensbruck concentration camp. What happens to Rose and the other prisoners is appalling and at times I had to put the book down and walk away.

Elizabeth Wein’s previous books had humour despite the awful things that were documented. Rose Under Fire is missing this. I also felt that you don’t get to know the protagonist so well, for me this created a little emotional detachment from Rose. Which is probably a good thing because the more you read about the Rabbits and Ravensbruck the more you wish this was pure fiction. Rose might be fictitious but you know what happened isn’t.

Rose Under Fire is a book that needs to be read. To be talked about. It’s emotional, intense and inspirational.

You don’t need to read CNV to read this but I truly believe you should read both books and then tell everyone you know to read them.

3 thoughts on “Rose Under Fire by Elizabeth Wein”